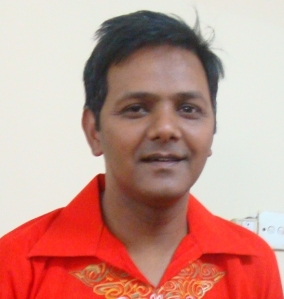 Chandan Paul, founder member  of BotTala is a prominent cultural and theatre activist. He is actively working in theatre for 10 years, as an actor, director, playwright and organizer. He directed a street drama named “ Noromedh” which was highly acclaimed by the audiences all over the country He was the Coordinator of a development organization named Nayantara Communications (a sister concern of Asiatic Marketing Communication Ltd.), that is producing “Sisimpur”, a Co- Producer of Sesame Street, NYC.  Sisimpur is the most popular Children Based TV program in Bangladesh. He has also written a stage play named Dhamail which is the first stage play by BotTala. Dhamail has been applauded for in Dhaka and all over the country. He has been active in writing numerous TFD scripts produced by BotTala in different locations of Bangladesh.