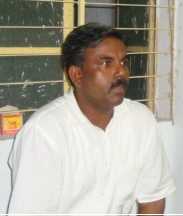 Abu Daud Ashrafiee, founder member of BotTala has been a dedicated cultural and theatre activist for the last 22 years. He is an acclaimed set and light designer in Bangladesh. He is involved in acting, organizing and directing. He is an engineer of Titas Gas Transmission and Distribution Company Limited. As a set Designer, Abu Daud Ashrafee designed in Ghor Jamai, Khandani Kissa, Jhinder bondi, Projapoti, Rastro Banam, Khona and worked as a light designer in Ghor Jamai, Khandani Kissa, Projapoti, Jhinder bondi, Rastro Banam, Khona and Theater School’s Academic production “Rakto Korobi” in 1992 and in the same year he worked as a Light designer of Jatra Utshab held at Shilpokala Academy.